Playing high-level chess is nowadays possible only with a thorough knowledge of the opening theory. Because of the rapid expansion of the modern opening theory its role becomes too large and sometimes even dominating according to more and more chess players, and grandmasters, including Garry Kasparov and Bobby Fischer - by many considered to be the best chess players in the world.

This objection is overcome by Superchess: a natural and logical extension of chess in which the players together create the starting position following a simple procedure. Superchess is virtually chess without the opening theory.

Superchess is played on an ordinary 8x8-chessboard with ordinary chess pieces, but with a few additional new pieces. The new pieces move slightly different than conventional pieces. For example, the Amazon moves like a Queen or Knight. Studying the opening theory will not be worthwile in practice because too many different starting positions exist.

Now it comes down to strategical insight and tactical ingenuity only! 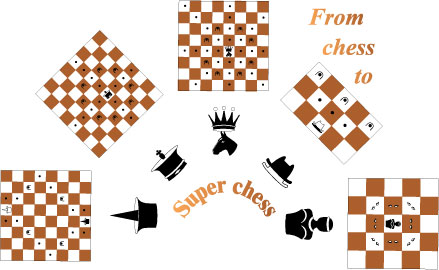